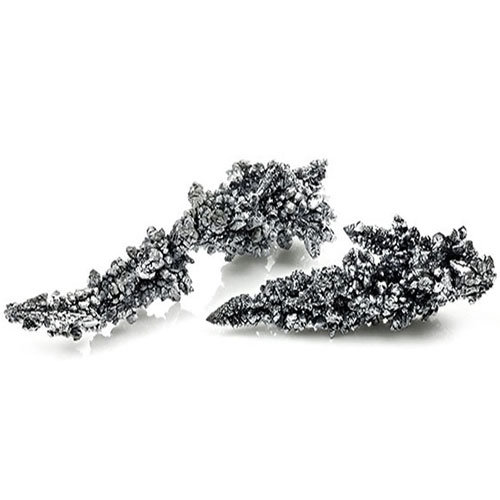 Vanadium is a hard silvery-grey malleable metal. It's used mostly as an alloy for strengthening steel.

This metallic element was first discovered in 1801 by Spanish Mexican scientist Andrés Manuel del Río.  Having prepared different compounds he observed a variety of colours.  He named the element 'panchromium' from the Greek for 'all colours'.

At some later point whilst heating the compounds he noted they turned red.  He then changed the name to 'erythronium' from the Greek for 'red'.

Having sent his newly discovered chemical element for further analysis the sample was declared incorrectly, to be chromium.  It was another twenty seven years before Swedish Professor Nils Gabriel Sefström rediscovered vanadium.  He named it after Vanadis, Scandinavian goddess of love and beauty.

Subsequent analysis confirmed it was the same element that had originally been discovered by Andrés Manuel del Río.

Vanadium reacts with a variety of other elements.  The chemical compounds it forms often exhibit beautiful colours.  Emerald gets its colour from trace amounts of chromium and vanadium.

Most ores from which vanadium is extracted come from South Africa, Russia and China.  It can be found in about sixty five different minerals.  It does not occur as a native element which means it can only be found when combined with other elements.

Native elements are minerals made up of a single chemical element.  Examples include copper, gold, sulfur and carbon.

Vanadium is a malleable (can be shaped without breaking), ductile (can be drawn out into the shape of a wire) and corrosion-resistant metal.  These properties make it ideal as an alloy.

Adding the smallest amount to steel which is an alloy of iron improves strength considerably.

Vanadium doesn't lose hardness when exposed to high temperatures so can also be used in machinery that generates heat.