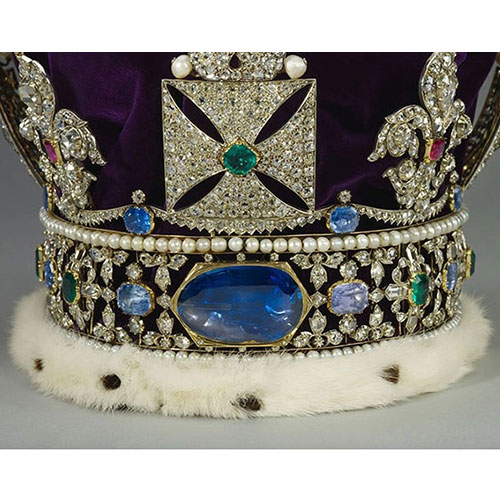 Stuart Sapphire from the House of Stuart

The Stuart Sapphire from the Scottish House of Stuart is part of the British Crown Jewels.  It's currently mounted in the back of the Imperial State Crown.

The sapphire was originally set in the crown of King Alexander II of Scotland for his coronation in 1214.  It was then claimed by Edward I of England in 1296.  It then passed through the hands of King Edward III of England, his brother in law King David II of Scotland and his sister Marjorie Bruce.  She later named the stone after her son Robert II first monarch of the House of Stuart.

Oliver Cromwell sold the Stuart Sapphire with the rest of the Crown Jewels.  It was returned to Charles II of England once the monarchy had been restored.

When James II went into exile in France in 1688 it's believed he smuggled the Stuart Sapphire with him.  After his death it was passed to his son James Stuart who in turn passed it to his son Henry Benedict Cardinal Duke of York.  When he died it was left to George III.

In 1838 Queen Victoria had the Stuart Sapphire set in the front of the Imperial State Crown.  It was positioned below the Black Prince's Ruby.  In 1909 it was moved to the back of the crown to make space for the 317 carat (63 gram) cushion-shaped Cullinan II diamond.

In the band at the back of the King’s State Crown may be seen a very large sapphire, known as the Stuart sapphire, which has seen many adventures. What its early history was is not known, but at one end is drilled a longitudinal hole evidently made for some attachment so that the stone might be worn as a pendant.

It first came into recognition in the reign of Charles II, who wore it in his crown, but whether he received it from Charles I or acquired it in his wanderings is not quite clear. At his death the sapphire passed to James II, who when he was dethroned and fled to France took it with him.

James II left the sapphire to his son, 161Charles Edward, the Old Pretender, who in his turn left it to his son, Henry Bentinck, known as Cardinal Yorke, by whom it was bequeathed, with other Stuart relics, to George III. George IV and William IV in turn owned it, and then it came to Queen Victoria, who very greatly prized it and had it set in the band of her State Crown, in the front and just below the Black Prince’s ruby. This pride of place the Stuart sapphire resigned in favour of the Star of Africa, a portion of which Edward VII placed in the crown, symbolising the entry of the Union of South Africa into the brotherhood of the British Empire.

The Stuart sapphire is of great size, being about 1-1/2 inches in length by 1 in. in breadth, and is oval in shape. It is without serious flaw and of good colour, though paler than some of the best sapphires to be found in other portions of the regalia. The stone is set in a gold brooch, and can be removed and worn as a personal ornament.

George Younghusband was given the post of Keeper of the Jewel House by King George V in 1917.  The Jewel House which houses the British Crown Jewels is located in the Tower of London.