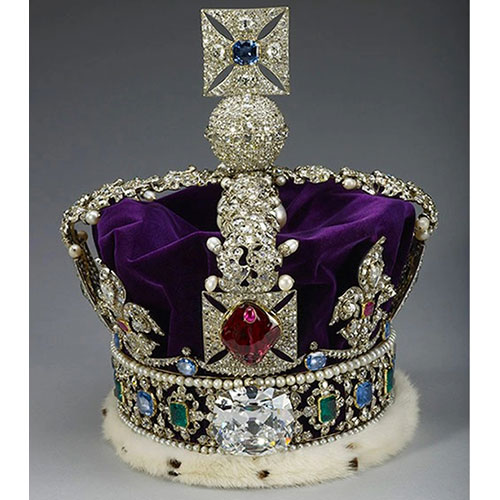 The St Edward's Sapphire is one of the oldest gemstones in the royal collection.  This blue gemstone is mounted in the Maltese Cross at the top of the Imperial State Crown.

It's named after Edward the Confessor King of England who's believed to have worn the sapphire in a ring.  The ring is said to have been buried with him in Westminster Abbey in 1066.  It was then apparently removed when his body was re-interred in 1163.

The St Edward's Sapphire was cut into its present form for Charles II.  It was later mounted in the Maltese Cross at the request of Queen Victoria.

The Imperial State crown is on display in Jewel House in the Tower of London.

The crown is worn by a newly appointed monarch as they leave Westminster Abbey after the coronation.  It's also worn during the State Opening of Parliament.  It's decorated with 2,868 diamonds, 17 sapphires, 11 emeralds and 269 pearls.

The uncut large red gemstone which is the Black Prince's Ruby is actually a spinel.  The smaller ruby embedded within it fills a hole that was once drilled so the stone could be worn as a pendant.