This spectacular Kambaba Jasper pendant is certainly not for the faint hearted and it's safe to say it's one of the larger pieces from our collection of gemstone jewellery.

Kambaba Jasper which is also known as Crocodile Jasper is a unique stone that can only be found in Madagascar. Some argue that due to its geological make-up it would be more accurate to describe it as a rock instead of a mineral.  It has even been suggested that it should be known as Kambaba Stone instead of Kambaba Jasper.  Furthermore it is occasionally referred to as Kabamba Jasper after the local area in Madagascar where it's mined.

A great deal of misleading and inaccurate information has been written about Kambaba Jasper over the years primarily because it has been confused with another stone that's also from Madagascar called Kambaby Ocean Jasper but despite the similarity in their names, the two are completely different materials.  It took a great deal of research and a good number of years before we managed to speak to a mineralogist who explained to us that the similarity in the names was the root cause for all of the confusion.

Having been crafted by hand in a fine sterling silver setting, this large and highly polished Kambaba Jasper cabochon makes a fantastic piece of jewellery and one which is sure to attract plenty of attention. 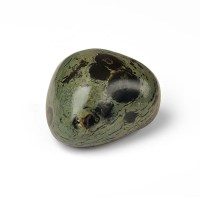