Poppy jasper which is a variety of orbicular jasper features the minerals quartz and feldspar which crystallize to form orbicular or spherical shaped structures. This grey and white variety is not seen that often and tends to be overlooked in favour of more colourful varieties particularly owyhee jasper which is a variety of poppy jasper that's mined on the Idaho/Oregon border in the USA.

This highly polished poppy jasper cabochon sits in a hand crafted setting of fine sterling silver and despite its size it's not particularly chunky.  The bale has been designed to be very slightly larger so that it can be worn on a thicker style of chain if preferred.

Jaspers are often named after a specific characteristic such as a colour or type of marking but can also be named after the location where they're found.  Hundreds of different varieties can be found around the world and although often described as a mineral they're actually classified as rocks because although made up primarily of quartz and chalcedony it also features traces of many other minerals and substances. 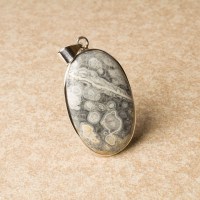