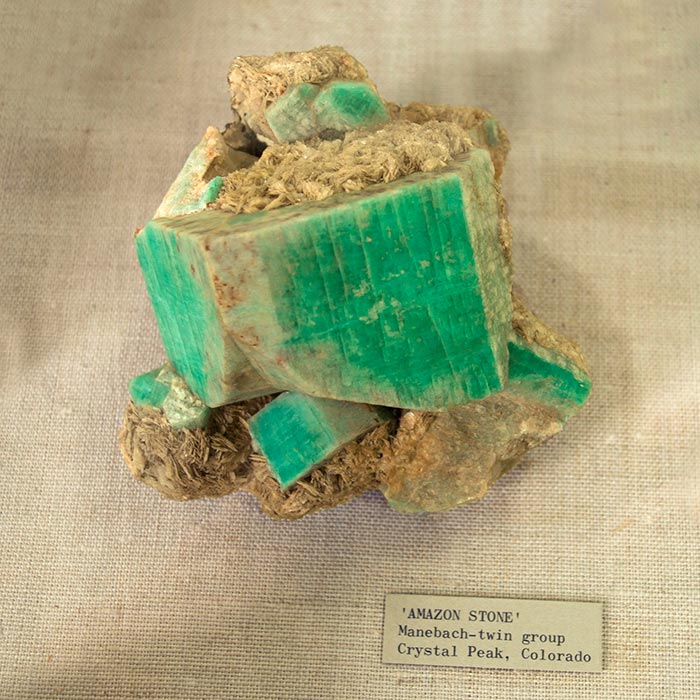 Amazonite is an attractive blue green variety of microcline whose colour is caused by lead.  The more lead that's present in amazonite the deeper the colour.  Microcline is one of the most common of all feldspar minerals.

Feldspar is a rock forming mineral which accounts for more than half of Earth's crust.

Amazonite which is not particularly common is also known as Amazon Stone.  In the past it came almost exclusively from Miyask in the Ilmen Mountains not far from Chelyabinsk in Russia. More recently it has been found in Colorado and a few other localities in the United States as well as Madagascar.

Only blue-green varieties of the mineral microcline may correctly be referred to as amazonite.

Although named after the Amazon in Brazil, amazonite is not found in this area.  It's believed to have been mixed up with another green stone that was found there around the same time.  According to Dr J. Kourimsky author of "The illustrated encyclopedia of minerals and rocks" the stone that was found by the Amazon river was nephrite jade.

Amazonite can however be found in other areas of Brazil particularly the state of Minas Gerais which means 'general mines'.  Other sources include Canada, Namibia, Australia, Italy and the Ural mountains of Russia.

Some of the world's finest amazonite comes from Pikes Peak in Colorado.  Many of the crystals from this locality occur alongside smoky quartz.  Fine crystals of amazonite have recently also been found in Ethiopia. 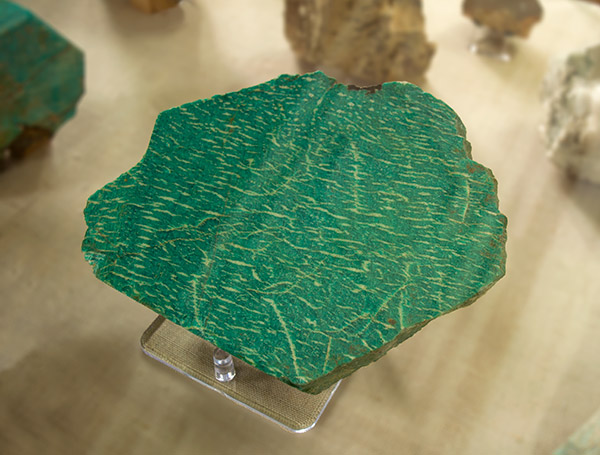 When used for its healing properties amazonite is a powerful stone that brings courage and improves self esteem.  It's said to protect against pollution from electromagnetic fields (EMF).  Despite its strength and power this soothing crystal helps calm mental chaos particularly when caused by stress.

On a physical level amazonite balances masculine and feminine energies.  It works with the heart and throat chakras to strengthen the flow of energy between the two.  This improves our ability to communicate well especially in matters relating to the heart.  It strengthens intuition and promotes truth, clarity and responsibility.

Amazonite enables us to look at situations objectively and to see both sides of the story.  These healing properties make it a great stone for relationships.  It can soothe tension, ease frustration and help restore harmony and trust.

For those who want to get a better understanding of themselves and to find out where they're going in life, working with amazonite can help you tap into deeper feelings.  It removes uncertainty replacing it with a clear and more positive vision.  Amazonite is also beneficial for those who are afraid to connect with or to show deep inner feelings.

As a tumbled stone amazonite can be used as a worry bead.  Its soothing energies bring an intense sense of calmness whilst gently releasing fear and anxiety.  It may also be used to dissipate anger and negativity.

For those who are emotional amazonite helps regulate ups and downs hence producing more balanced feelings. Amazonite beads that have been found date back as far as the 5th millennium BC.   The Ancient Egyptians used this stone for carving deities and considered it to be a catalyst between the living and the Gods.

During the late 1800's Colorado became the most important mining source for the finest grade amazonite.  The state gradually replaced Russia as one of the world's leading suppliers.

Amazonite grades 6 to 6.5 on Mohs scale of mineral hardness.  Translucent crystals are incredibly rare but have been found.  The vast majority of amazonite is opaque.

The amazonite pictures in our article were taken by us. All photos are clickable.  The first two pieces of amazonite are on display in London's Natural History Museum. The amazonite tumbled stones are from our collection.