Beautiful sugilite sphere from our collection of crystals rocks and minerals.  This magnificent stone boasts subtle markings and a fantastic blend of colour which includes hues of pink and purple.  Found almost exclusively in the Kalahari Manganese Field, Northern Cape South Africa, sugilite has become increasingly rare in recent years and there's huge demand particularly from Russian and Chinese collectors which has pushed the price of this already expensive mineral even higher.

Sugilite is a manganese rich mineral named after the Japanese professor of petrology who initially discovered it during the 1940's.  His name was Professor Ken-ichi Sugi and the G is hard hence is pronounced in the same way as the g in "gold".  The reason for mentioning this is because the g in sugilite is pronounced in the same way but is almost always mispronounced and said with a soft g as in the word "german".

Although highly polished this sugilite sphere exhibits more of a dull lustre which is a reference to the way that light interacts with the surface of the stone.  Minerals with this kind of lustre do not reflect light but instead absorb it.  Sadly the word "dull" isn't particularly enticing but in regards to crystals rocks and minerals it simply refers to the way the human eye sees the object with the addition of light.

Polished mineral spheres make great collectables but with the mineral sugilite becoming rarer by the day, it's not known for how long these kind of pieces will remain within the grasp of the average collector or enthusiast.

Our photograph of this sugilite sphere was taken under studio lighting which enhances its magnificent colours. 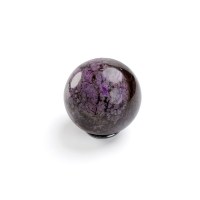 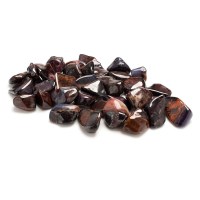