Septarian was formed during the Cretaceous Period the end of which was marked by the extinction of the dinosaurs. It's a distinctive stone that's also known as a septarian nodule or septarian concretion because in geology that's a more accurate description of what it actually is.  Septarian which is made up of calcite, limestone and aragonite is a unique combination of rock, mineral and organic matter.

Although it's not known exactly how septarian nodules were formed, it's believed the shells of dead and decaying sea life attracted sediment and minerals to accumulate around them and in doing so, nodules or mud balls were created. As the oceans receded the nodules dried out and slowly cracked due to shrinkage in the clay.  Natural minerals subsequently flowed through what was now sedimentary rock filling the cracks hence causing the formation of crystals.

This septarian sphere is a beautiful and eye catching piece that would make a lovely gift for anyone with an interest in crystal healing, geology and/or polished rocks and minerals. 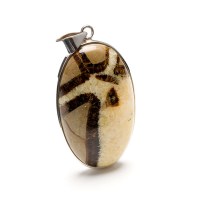