The front of this iron pyrite nugget sparkles beautifully as it catches the light which it does at almost every angle.  Also known as Fools Gold, this name came about because this brassy yellow coloured mineral is often confused for gold but a simple test will quickly dispel any confusion.  If you hit a small piece of iron pyrite with a hammer it will shatter, do the same to a small nugget of gold and you'll do nothing but squash it.  The colour of the streak in the two minerals is also different, in iron pyrite it's greenish black whilst in gold it's yellow.  Streak is the colour of a mineral in powdered form and stones can be tested by using a streak plate which is basically an unglazed piece of porcelain.

Iron pyrite is a popular and well known natural mineral with a distinctive metallic lustre and brassy yellow hue.  It can be found in many geological environments and comes in several different forms.  Despite being quite hard and grading 6 to 6½ on Mohs scale of mineral hardness, it is very brittle.

Iron pyrite which is also known as pyrite is particularly popular with younger rock and mineral collectors because of its curious similarity to gold.  When compared side by side the colour of gold is much richer and gold is also heavier.  Pyrite originates from the Greek word for fire but in Ancient Rome the word pyrite was used for many different types of stone all of which created sparks when struck against steel.

Iron pyrite is a chemical compound of iron and sulphur so is correctly described as an iron sulphide mineral.  Despite containing iron it's not used as an ore because the iron is too difficult to extract. 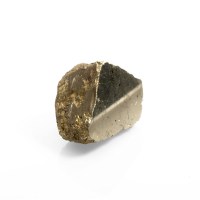 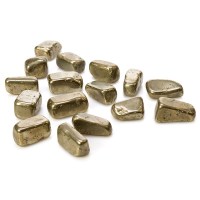 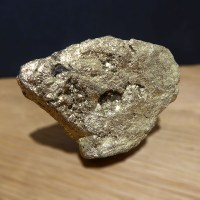