Rare and unique malachite mineral specimen from the Democratic Republic of Congo.  This central African country is home to some of the world's largest malachite reserves and many of the finest specimens come from here.  Although Congo is one of the most important producers of malachite, two enormous deposits in the Ural Mountains of Russia known as Gmeshevskoe and Mednorudnyanskoye also produce significant amounts and both were discovered as recently as the mid 19th century.

Malachite is usually a mineral that's relatively easy to identify because of its rich green colour and distinctive markings but rare pieces like this are not immediately recognisable as being malachite.  More suited to a collector, this piece was most likely part of a larger stalactite formation.  The holes which surface water would have dripped through are still present and visible.  The mineral exhibits a slightly waxy lustre and is unlike any other piece of malachite that we've seen before.

Malachite was used as a pigment in paint for thousands of years and can be seen in Ancient Egyptian wall paintings in tombs in Luxor to various works of art from the Renaissance.  During the 1800's its use as a pigment began to diminish with the introduction of synthetic replacements.

One of the earliest ores of copper, the use of malachite can be traced back at least five thousand years.  Around 4000 BC it was discovered that heating the stone at high temperatures reduced it to native copper. 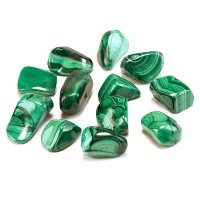