An unusually large piece of dravite tourmaline from our collection of crystals rocks and minerals.  Dravite is a brown variety of the mineral tourmaline that's rich in sodium and magnesium.  When exposed to heat its distinctive colour becomes lighter.  Despite dravite not being a particularly rare mineral, it's often overlooked because it's not particularly colourful and the formations in which it occurs can be fairly uninteresting.

Dravite tourmaline was first documented in a book on mineralogy written by an Austrian professor in 1884 and was named after the Drava river in Austria and Slovenia.  This variety of brown tourmaline can be lustrous and is known to exhibit impressive crystallisation but it's very rarely used as a gemstone.

Tourmaline is the name given to a family of minerals many of which have a different composition but all share the same basic crystal structure.  Dravite is relatively hard and grades 7 to 7½ on Mohs scale of mineral hardness.

This piece is well included with silvery specs of mica and it's the only brown tourmaline mineral that we have in our collection.

Tourmaline is one of the modern birthstones for the month of October with the other being opal. 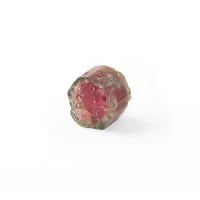