Septarian is a particularly distinctive stone that's widely used as a lapidary material.  Also known as a septarian nodule or concretion, it's a kind of mud ball that was formed as the oceans receded many millions of years ago and it's believed that as they dried out they subsequently cracked which allowed calcite crystals to grow in the newly created voids. There's a great deal of speculation about whether the mud balls cracked because they dried out or whether other forces or circumstances may have caused this to happen. It's a topic that's often discussed in geology forums but to date, there is still no commonly accepted explanation.

Being made up partly of clay means that septarian tends to be a slightly heavier mineral but it's also well known for its magnificent yellow crystals.  More accurately described as a rock, septarian is made up of calcite, aragonite and limestone.

One of the larger septarian spheres that we currently have available in our collection, this eye-catching stone will certainly make an eye-catching display piece. 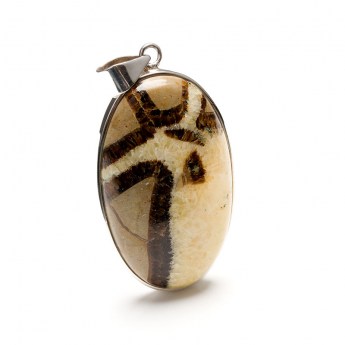