Kambaba jasper is a distinctive stone from Madagascar that tends to be quite easy to identify because of its rich green colour and black spherical markings. Also known known as Crocodile Jasper and Green Stromatolite Jasper, it's a popular lapidary material that's found nowhere else in the world.

Having researched kambaba jasper over many years we have always been led to believe that it was a stromatolite which is a sedimentary rock formed from blue-green algae.  We have recently discovered however that much of what we thought we knew about this stone is actually inaccurate.

What we don't want to do is to make this article unnecessarily complicated and possibly even boring for those who are not interested in the geological make up of rocks and minerals but at the same time, it's important that information on materials featured in our collection is completely accurate.  The following paragraph explains briefly what we now know about this rock but this is only half of the story.  For everything there is to possibly know about kambaba also known locally in Madagascar as kabamba, take a look at our full article.

Kambaba jasper is not actually a true variety of jasper nor is it a stromatolite so it's not even a sedimentary rock.  The material is in fact volcanic which makes it an igneous rock.  Its green colouration is caused by the presence of quartz which features orbs of the mineral feldspar embedded with aggregates (structures formed from a mass of fragments/particles loosely compacted together) made up of tiny needles of amphibole which is an important group of mostly dark-coloured minerals which form prism or needle-like crystals. From a geological perspective a more accurate name would be kambaba stone.

A large and beautifully polished kambaba stone cabochon that could well be used to create a spectacular piece of jewellery.  Alternatively this fine grade stone could be displayed on a small stand within a collection of polished rocks and minerals. In our second photo this kambaba jasper cabochon looks as if the corners are more square than they actually are.  The edges are in fact softly rounded which can be clearly seen in our first photo. 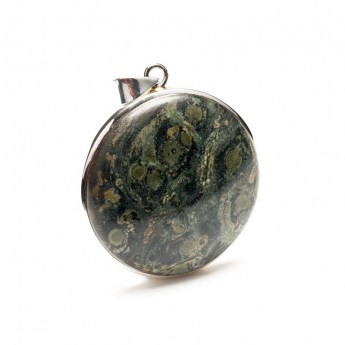 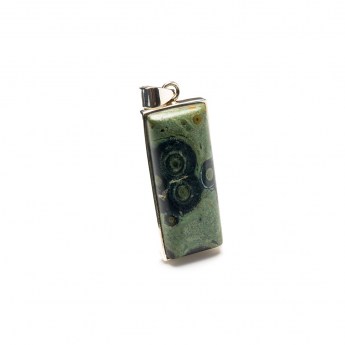 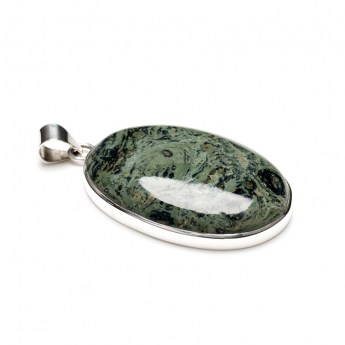