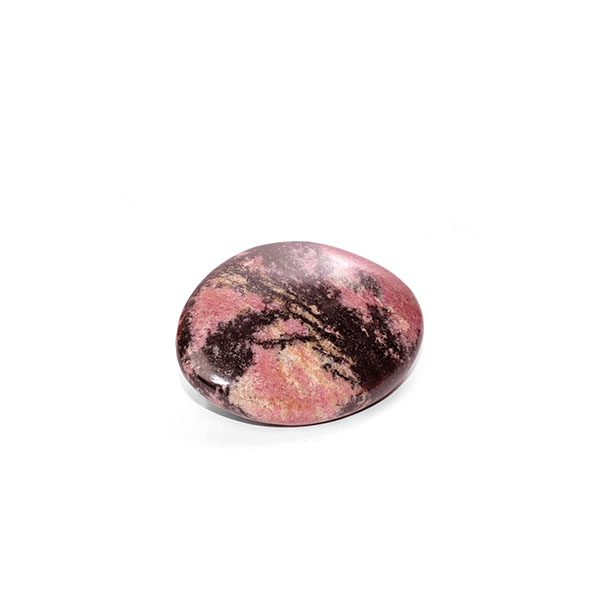 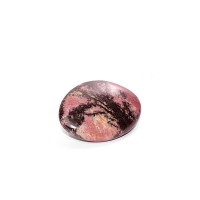 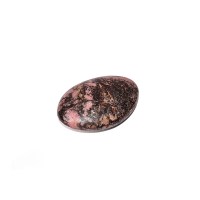 Rhodonite palm stone, beautifully polished and exceptionally tactile.  This eye-catching mineral fits comfortably into the palm of the hand which makes it ideal for use in alternative therapies such as crystal healing.  It exhibits a dull lustre and is the only piece of its kind that we currently have available.

Although rhodonite is best known for its raspberry red colour it can also occur in many other shades of red and pink and is often found with inclusions of manganese oxide. These black markings can either be seen in the rock matrix, as fracture-fillings or as dendrites which are crystal formations that resemble 'branching forms'.  The amount of manganese oxide that's present in rhodonite can vary dramatically and whilst some stones have nothing more than a single tiny spec, others can be so heavily included that the entire surface of the stone may be almost completely black.  When inclusions occur as dendrites they're sometimes mistaken for fossilised organic matter but are simply a pattern of crystals similar to those seen on glass windows.

There are a couple of very minor nicks in this rhodonite palm stone which can be felt more than seen. It is not always possible to polish a mineral to perfection without losing more of it than you'd like and part of the beauty of nature is that perfection rarely exists. In crystal healing minerals with imperfections whether they've occured naturally or at the hand of man, are believed to hold some of the strongest energies. This is because despite sustaining "a wound" they're still beautiful enough to attract our attention and which allegedly makes them more powerful.