Carnelian is a variety of chalcedony whose colour varies from deep red to reddish brown to various shades of orange.  It can also be white and some stones like this one can even feature subtle hints of blue. Its colour which can be enhanced through various heat treatments is caused primarily by the presence of iron.  Colour can be uniform or occur in bands but stones that are banded tend to be referred to as agate.  This translucent variety of chalcedony exhibits a vitreous lustre which is most noticeable after it has been polished.  It's a popular mineral which is widely used as a gemstone and for other lapidary purposes.

This large and highly polished carnelian free-form has attractive markings and several variations in colour can be seen. It's a free-standing ornamental piece which can be positioned on two different sides. It's one of the few larger pieces of carnelian that we currently have available in our collection.

Carnelian is very similar to sard and their names tend to be used interchangeably. Both were popular in Ancient Greece and Rome for carving into seals and the name sardion was a generic name that was used for all red varieties of chalcedony that were deemed to be suitable for carving.  As specific differences between carnelian and sard came to light, the stones were given their own names. The main differences are that carnelian tends to exhibit lighter shades of colour, it's not quite as hard or tough and the way in which the two stones fracture is different.

This polished carnelian free-form does have a couple of minor indentations but these kind of anomalies are not unusual in natural minerals. 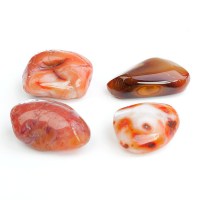 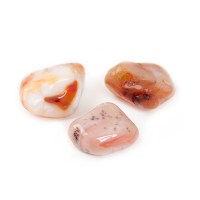