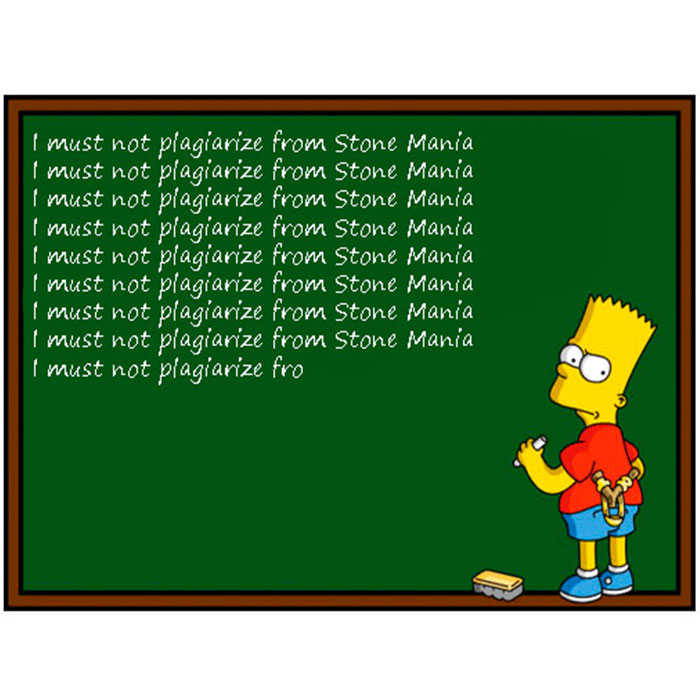 Trying to find original articles to read online particularly about crystals rocks and minerals can be a challenge.  So much of what's out there is repetitive, inaccurate and in many cases has been written for the sole purpose of improving search engine ranking.

Having been writing articles for my website for many years, one thing I can say for certain is plagiarism is a massive problem.

According to the Oxford Dictionary plagiarism is "the practice of taking someone else's work or ideas and passing them off as your own".  It comes from the Latin "plagiarius" meaning "kidnapper" and contributes to a huge amount of inaccurate and misleading information being spread online.

Despite being against Google's User Guidelines, some years ago plagiarism became so bad that Google stepped in.  Following an update to their algorithm they announced duplicate content would no longer rank well in search results.

Plagiarism has been happening ever since there have been words to say and ideas to copy.  The word was first used in some form around 80 AD.  It's widely believed William Shakespeare and Leonardo da Vinci both plagiarised from others.

Until use of the internet became widespread, plagiarism was something most of us were unfamiliar with.  As the internet has grown and with more information being shared online, the opportunity to steal the work and ideas of others has become easier and more tempting.

With regards to rocks and minerals you only have to Google a popular stone and hundreds of pages featuring similar information show up.

At one time the snippets of text in search results included the exact words that had been used in the search.  This made finding duplicate content quite easy.

I remember doing research for an article about the mineral turquoise.  I knew the name had originated from the French words "pierre turquoise" but knew very little else about the stone's history.  Having searched for "pierre turquoise", hundreds of results appeared but so much of the introductory text was strangely similar.

The results all came from different sources yet the same information was repeated over and over again. Although some effort had been made in a few articles to disguise the fact that plagiarism had taken place, in others no attempt had been made at all.

When writing about amethyst for example, there's always going to be some information that will be repeated elsewhere because facts are facts.  With that said, we all express ourselves differently so whilst a few lines or the odd paragraph may be similar to what someone else has written, anything more and it's likely to have been plagiarised.

Paraphrasing Can Lead to Inaccuracies

Once Google addressed the problem by penalising duplicate content, word quickly spread.  Whilst it was a turning point for many, it didn't eradicate the problem completely.

The difference was that instead of just changing a few words here and there, entire paragraphs started being paraphrased.  People also began combining information from multiple sources.

This led to a whole new problem.  With so much information being repeatedly rewritten often from articles that were already not accurate, facts were becoming mixed up or lost completely.  We've clearly demonstrated this in an article we've written about Kambaba Jasper.

Whilst writing this article about plagiarism I did a search for "amethyst well known mineral and gemstone".  The following results were some of many that appeared.  Despite coming from completely different websites, it's not difficult to see these articles are not someone's own original work. 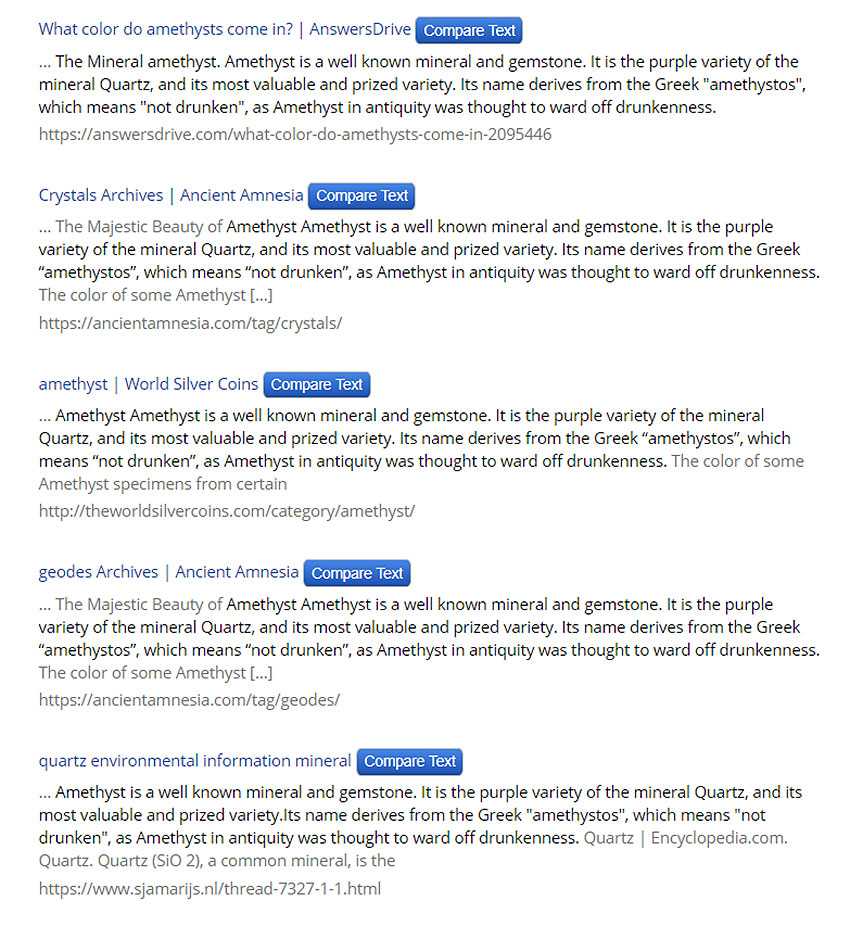 The problem is far more prevalent on small business websites.  I believe this is likely to be because whilst the owners appreciate the importance of publishing articles, they rarely have the time or resources to keep writing them.  It's therefore easier to plagiarise material or turn to a copywriter who's unlikely to have experience in the required subject matter.

Research will most likely be done online and whilst the end product may read well, there's a good chance it will be vague and lack accuracy.  If the article ends up ranking well on Google you can guarantee it will be plagiarised.

With around four billion people using the internet worldwide and almost two billion active websites, a huge amount of data is being shared daily.  The ability to plagiarise someone else's work is as simple as copy and paste.  The problem is never going to go away completely but with technology evolving all the time, Google will keep finding new ways to tackle it.

Here's a perfect example of how accuracy can become lost by plagiarising an article that has already been plagiarised.  It's a story about amethyst that's featured on countless websites.  It relates to a myth written by French Poet Remy Belleau that was published a year before his death in 1576.

This is a copy of the original text which is not that easy to find;

"Bacchus (Roman name for Dionysus, Greek God of wine) was pursuing a maiden named Amethyste who refused his affections. Amethyste prayed to the gods to remain chaste, a prayer which the goddess Diana answered, transforming her into a white stone.

Humbled by Amethyste's desire to remain chaste, Bacchus poured wine over the stone as an offering, dyeing the crystals purple"

Although written in the 15th century it's stated on almost every article I've read that it comes from Greek mythology.  That's not true.  Furthermore, as the text has repeatedly been re-published the content has continually changed.  In some cases it's no longer recognisable as the original myth.  As a result there are now several variations in existence.

Everyone who republishes the myth claims it comes from Greek mythology.  This version is one of the most popular;

"Dionysus had been insulted by a mortal and swore to slay the next who crossed his path creating fierce tigers to carry out his wrath. The mortal turned out to be a beautiful young woman named Amethystos who was on her way to pay tribute to Artemis (Goddess of virginity and protector of young girls). Her life was spared by Artemis who transformed the maiden into a statue of pure crystalline quartz to protect her from the brutal claws.

Dionysus wept tears of wine in remorse for his action at the sight of the beautiful statue. The God's tears subsequently stained the quartz purple."

Despite being a heart-warming tale that's just what it is.  The only reference to amethyst in Greek mythology relates to a stone given to Dionysus by the titan Rhea in order to preserve the wine-drinker's sanity.

What few people realise is that it's okay to republish someone else's work without being penalised providing citations are used.  These show the reader where the work has come from and reveal the identity of the author.

They must be used whenever something is quoted, paraphrased, if an idea has been used that has come from someone else and whenever a reference is made to someone else's work.  Citations also enable the reader to find the original text should they wish to.

Plagiarism is not just about reproducing written material to pass it off as your own.  It also includes ideas, photographs and even the way a business presents itself.   In many ways it's similar to copyright infringement which is using someone else's work without obtaining their permission.

Plagiarism is slightly different because not only is the work being used but the person using it is also taking all the credit.

Some years ago my entire business model including my website was plagiarised by a company called Lumina Jewellery.  The screenshot below is the Order and Returns Policy that I wrote for my business.  Next to it is the same page after it was plagiarised by Lumina Jewellery.  They also copied the design of my website, my logo, my tagline and even the way I set my stand up at regional sales events.

A plagiarised article will not improve search engine ranking, it will not attract new visitors and is definitely not good for business.